The new West Coast Partnership, now branded as Avanti West Coast, began operations on 8 December 2019. A formal launch was held on Monday 9 December at various locations between London and Glasgow, with a special train linking the events. Representatives from West Coast Rail 250 attended many of the events, including the naming of the newly-liveried Pendolino “Pride and Prosperity” at Euston station. 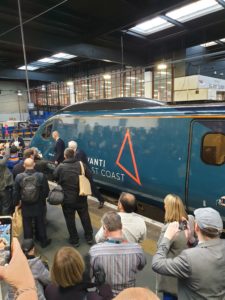